One of the main reasons I chose to do this particular level of the Chakra Garden was that I’ve been continuously working on a model of a Koi fish. Each time I have modeled it I have learned new techniques, and it goes quicker each time. I believe doing several iterations of the same thing can be beneficial to developing my skills as a 3D artist. Below is a model I did at the beginning of the semester. Not the jaggedness of the fins – this was caused by an improper understanding of how to use the Move tool while trying to achieve a feathered look. 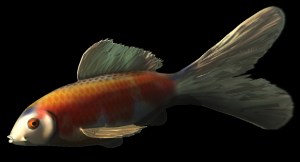 Below is the model I completed yesterday. The entire model and Polypaint took apprx 6 hours, whereas my previous model took over 10 hours. 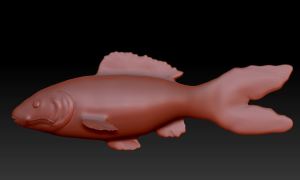 I’m still not entirely happy with the shape of the fins, nor the polypaint, but because of the approaching deadline, it was time to move on. I brought the model into Maya. This time it was much easier to export the UV texture maps and low-poly OBJ, which is something I have struggled with in the past. Again, it was good to do iterations to increase retention of learned skills. 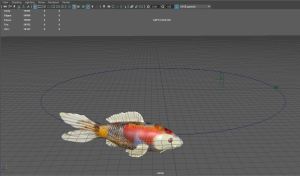 I was able to quickly put the fish model in a circular motion path in Maya, and it animated smoothly. I exported it as an FBX then imported into Unreal.

Unfortunately the animation doesn’t work in Unreal, he just kind of floats there in the sky. This is a problem that can probably be solved with a few tweaks, but again, I need to let it go in order to wrap up other things to meet the deadline. So for now, he looks like a balloon!