I wanted to show some boundaries for the scene, especially as people may be experiencing this in VR. I tried making walls, but they were too intrusive and felt claustrophobic. Instead I opted to scale them smaller to allow more light/air around them. I felt this was a good way to imply boundaries without them being so concrete. Eventually I would like to create “dome” effect that doesn’t occlude the sky, but that is something I will have to research. 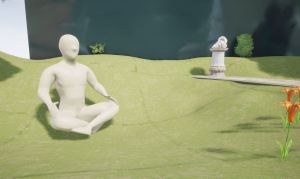 I wanted to add another asset, so I used Zbrush to model this seated meditating figure.