Next, I needed to create a low-detail figure that will used at the beginning of the video. This figure will eventually be placed in a meditative pose, but it was easier to build it in the classic figure model pose and then rig it with “bones” to fold down into a meditative pose.

I found a brief modeling tutorial by James Taylor on Youtube that gave me some insights on how to begin. I started with a reference image, and used a cylinder as my basic shape for the torso. Then it was just a matter of pushing vertices and edges to conform to the shape.

I used additional cylinders for the arms and legs. The trickiest part about this is attaching then with the right number of edge loops to the torso. The number of edges at the top of the arm must equal the same number of edges as the hole in the torso where the arm attaches. This gave me the most trouble. The hand was modeled starting with a box that was shaped and extruded to form thumb and fingers. 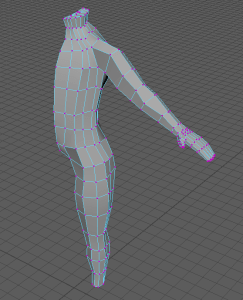 The foot was modeled in a similar way, beginning with a box. Again, matching up the holes from the ankle to the box that made up the foot was the most difficult part.

Finally, I mirrored the half for a symmetrical whole. 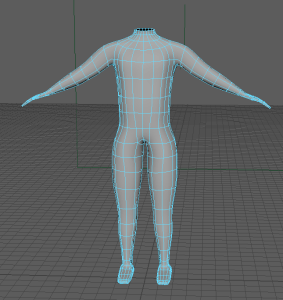