I experimented with a variety of ways to make a lily pad until I found a way that seemed to work best. For the first method, I used a curve tool to trace the outline of my reference image. I then used Planar Surface to give the curve a surface. For the second method I again used the curve tool to trace the image, and then I added a second line that ran across the radius of the shape and used the Loft tool.

Once I began studying other reference images I began to think about how to attach the stem, and decided on the third method shown below. Rather than tracing from the top with the Curve tool, I began with a long cylinder, and then used the faces at the top of the cylinder as the lily pad surface. I extruded the faces up and outward and began pushing vertices into roughly the shape of the reference image.

I was able to push and pull vertices to give the shape some irregularity. 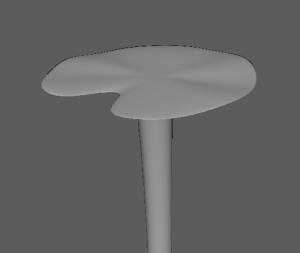 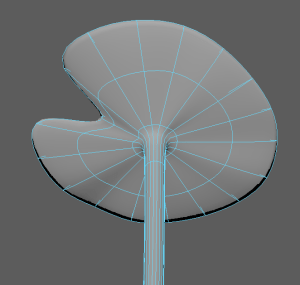